Jack...this is probably one for your good self. I wonder if it's possible to re-create some of the launches of these spacecraft from the shuttle? Before my last crash(so to speak...my fault entirely) I had a nice satellite deployment via the shuttle...ie. a spinning satellite looking like it was just leaving the launch vehicle. I've lost all my ssc code for this and I can't for the life of me, redo it.

Just a thought...I don't want to deflect your modelling time!

The waves will be back...sorry Don!

Actually i'd say this is more of an ssc thing- (grant...?

A satellite model could be modified to add an IUS (Inertial Upper Stage) and have instruments & solar panels stowed, but getting a good ssc could be quite tricky...
Once that's done though it could be used with any satellite, I assume all shuttle deployments would be pretty similar...? (obviously apart from building the ISS, deploying hubble, major earth orbit things)
- Jack Higgins
Jack's Celestia Add-ons
And visit my Celestia Gallery too!
Top

JackHiggins wrote:Actually i'd say this is more of an ssc thing- (grant...?

Sure, seems do-able. I could knock together something with a spinning Hubble, for instance, but it really wouldn't look right without a proper model satellite.

I guess i'll just have to make a satellite model then won't I!!

This particular post ties together a number of topics being discussed recently, so i'm going to post it a few times...

I've made a model of Magellan with the IUS still attached, as it looks in all the photos from the Space Shuttle, when it was being deployed. Download from http://homepage.eircom.net/~jackhiggins/celestia/ but have a quick look at the screenshots first: 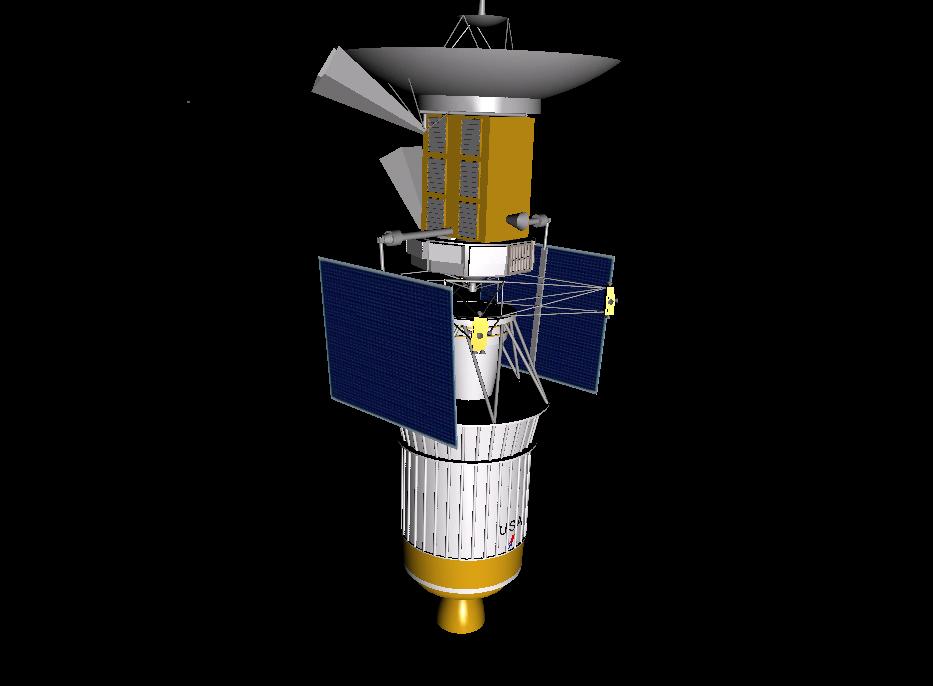 PS Thanks to everyone for the 1000+ hits on my site since the end of April!

Jack...exactly the model I was looking for! Great job...I saw it in my sons astronomy book and I thought it would look even better with Celestia. Grant...any luck with the spinning ssc? I'm not asking for much am I!

Luck, sir, is not involved.

Might need a tweak if your particular shuttle model is differently orientated from the version I have - this orientation gives me a shuttle planing along with its wings parallel to the horizon, its nose pointing forwards and its doors pointing upwards.
You can adjust the distance of Magellan from the shuttle by adjusting its SemiMajorAxis, but any closer than 0.02 (a shuttle radius) and I begin to see rendering anomalies when the two objects overlap visually. You can also adjust the orientation of Magellan relative to the bay doors by fiddling with its EquatorAscendingNode - setting it to 315 gives Magellan quite a nice head-up tilt, instead of having it at exact right angles to the shuttle.

Orientation     [-90 0 0 1]
I'm told the shuttle generally proceeds engines-first in orbit, to minimize the chance of a space-junk impact cracking a window or damaging a tile.

Can anyone give me a link to the shuttle model with doors open?
- Jack Higgins

Hello Jack...the shuttle thread is in 'developement' page 2. We started this project off in February, about a week before Columbia was due to re-enter.

Here are some links:

Well, here it is:

Here are some screenshots first though: 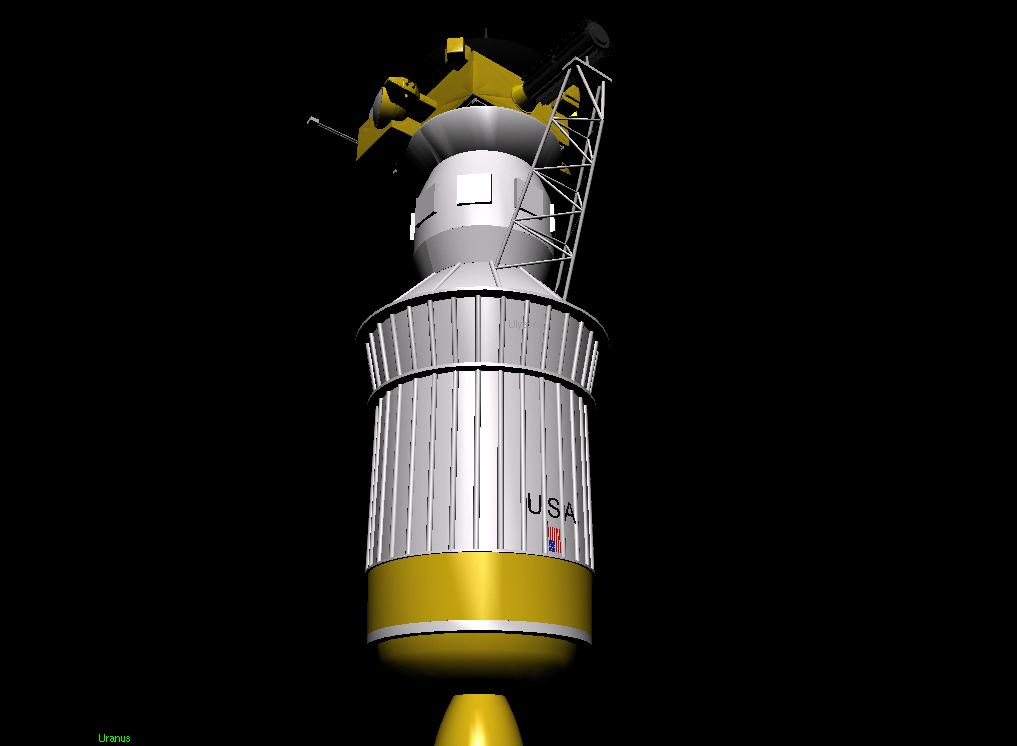 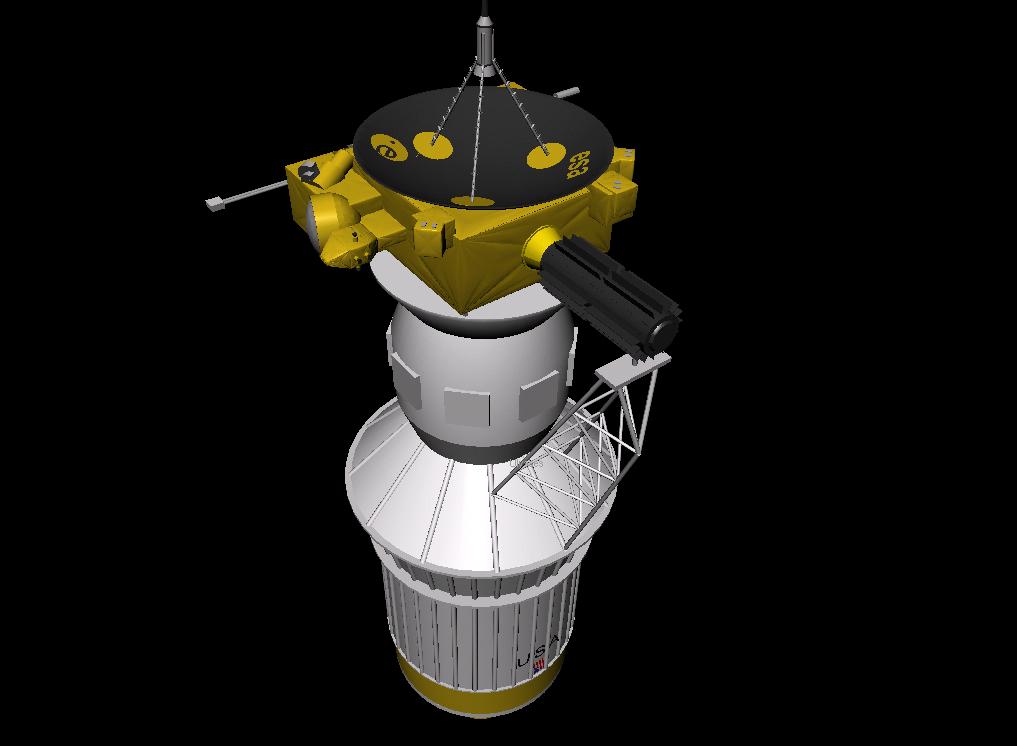 Nice work Jack and Grant. I think we're onto something here. Here's a nice shot of the Magellan launch.

where can I get that earth texture?
Mike M.

Hello Mike...it's a new specular texture I've been working on. It's very much 'experimental' at the moment. When I can get the dds plug-in to work again I'll be able to fix the land mask. It's an 8k dds, so it will be pretty heavy - around 21 megs unzipped. I'm still trying to sort out my webspace.

Here we go- the third of the "Big Three" interplanetary Shuttle deployments- and probably the longest overdue too...

Download from http://homepage.eircom.net/~jackhiggins/celestia/ but here are 3 screenshots first, taken over the Tibetan plateau. (That's an 8k earth texture btw...) 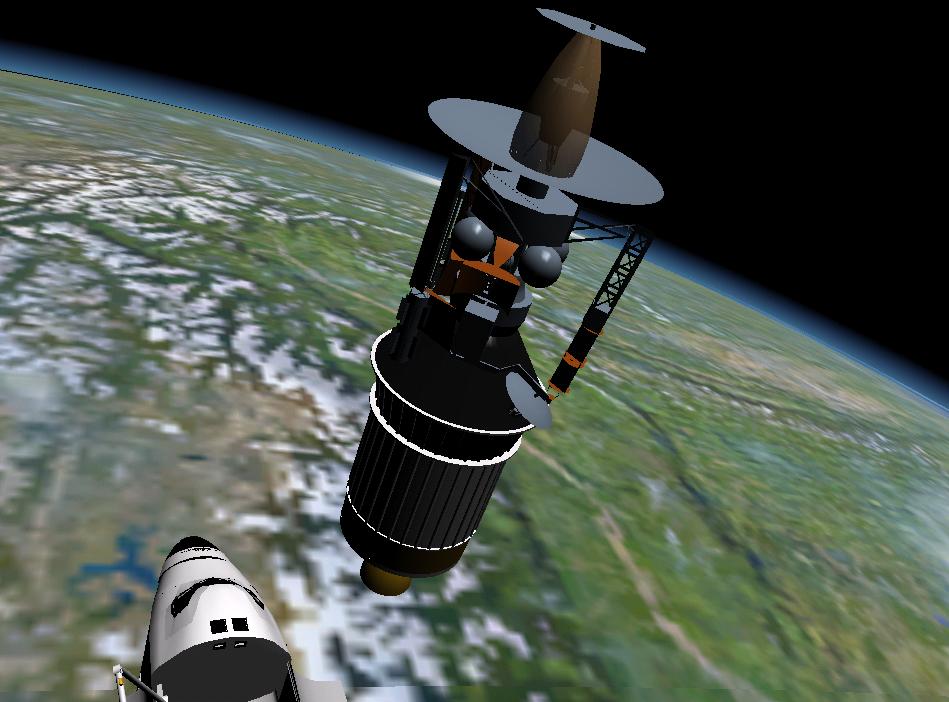 I got some real Space Shuttle orbital elements for STS-30 (Magellan deployment mission) from http://www.celestrak.com and tried to use them with your deployment ssc. I'm using one of bh's models (i've renamed it atlantis.3ds) it's the same one as in my screenshots of the galileo deployment above.

Any chance you could help me get this to work properly, and explain how to do it myself in future?!!

Heres the ssc i have at the moment, which produces very strange results (for me anyway..)


And on a related note, I can't see any SemiMajorAxis, or even an altitude measurement in Celestrak's 2-line format. Is there a formula to work it out from the other elements there already? (I assume it shouldn't be too hard, if you know the orbital period/eccentricity etc...?)

Not sure where you got your Period from - the NORAD two-line element set gives you mean motion in revolutions per day, so you just take the inverse of that to get the Period. Since PrecessionRate needs degrees/day, you multiply mean motion by 360.
To make Celestia correspond the real world, you need to extract an Epoch from the NORAD elements. Their format is a little awkward - it's a fourteen character string, the first two characters giving the last two digits of the year, and the remainder being the day of the year, with trailing decimals.
The relevant string for the elements you've used is 89125.05324085, so that's day 125.05324085 of 1989. I looked up the Julian Day for 1989 Jan 1 00:00:00, and then added 125.05324085 to get the correct Epoch.
Because of the business with the Epoch, deriving the RotationOffset gets a little wearisome. You have to allow for the rotations between the chosen Epoch and Celestia's default epoch. (In the formula I've given, "FRAC" indicates that you need to take just the fractional part of the number.)

As to the SemiMajorAxis: period-squared varies as radius-cubed, with a constant of proportionality involving the mass of the central body and the gravitational constant. I've lumped all that stuff together, along with some conversion factors, to produce the simple formula I've given - it converts periods in days to distances in kilometres. (It isn't quite right for an oblate object like the Earth, but the difference is too small to notice in Celestia.)

Added later: Just to state the bleedin' obvious so there's no chance of a mistake - the condensed formula above, used to convert period to semimajor axis, only works for satellites orbiting the Earth. The full equation, applicable anywhere, is:

where P is the period, a is the semimajor axis, G is the universal gravitational constant (6.67e-11) and M is the combined mass of primary and satellite - all in SI units.