This solar system is confirmed to be in the science fiction story I am making. I have chosed it to be in it, but a lot different


You can see it here:
http://www.facebook.com/UnknownSciFiMovieTitle


And a finished plot:
The series takes first place in the year 2036, in a fictional solar system far away from Earth. On a habitable moon called Janus, 1046 light years from Earth in the constellation Sagittarius.

The main-person in the story, is named Chris. He is known as the Vice leader/Commander of Milky Way, and his own father is The Great leader of Milky Way. He died in a horrifying battle against an evil civilization from the Andromeda Galaxy. They shot down his spaceship. He then awakens on Earth, sent by his own Goddess of the planet Janus.

His soul were sent to Earth by her, and then he were born on Earth. He were sent to Earth, to tell the humans about the danger that is out there. The humans need to join a federation, an Outer Galactic Federation(OGF). A federation about different civilizations in the Milky Way and other places in The Universe need to cooperate to make peace and tranquility in the universe. This federation did Commander Chris started, and this are what all civilizations are fighting for. It is only one civilization who doesn't follow this, and are the only threatening civilization in The Universe, and that is they from the Andromeda Galaxy.

And the humans, on Earth, is the only civilization in the Milky Way that hasn't joined this federation.

In 2040, Chris is being born on Earth. 14th of august, tuesday. He first don't know where he is. He starting asking questions of where he is, but then he realize where he is. He realizes that he is on Earth, why he is there. He is born as a human, but that doesn't take away his memory about where he is really coming from. Later in is childhood on Earth, when he grows older, his Earth-parents notice that he isn't like everyone else on Earth. He can't speak the language in the country he lives in. He only speak english and his own language, known as Janusian. Then FBI get known about this, and starting investigating it. They ask him a lot of questions of where he is from, who he are, and why he is on Earth. Later NASA get also known about this, and they and FBI need to hide the info about his identity.

In 2054, he speaking with the President of the United States and says that we need to prepare for a war. He and his civilization gives Earth some kind of a detection device that see if unknown passing into the humans solar system, and also the President need to sign under some kind of a contract. First they need to set up a meeting, all leaders in the Outer-Galactic Federation, coming to Earth and other big leaders in the Milky Way and some areas around Milky Way and other places in The Universe.
And this happens in the year 2062.

In the Andromeda Galaxy lies a very evil civilization that are planning to take over Milky Way and the entire universe. This will be the biggest war no civilization in the entire universe have seen before. They need to do something, to prevent this armageddon.
An another universe also exist, some of them coming to help and take down the evil people from the galaxy M31.
There is existing 7 universes. That is the Andromeda Galaxy civilization's plan to take over these universes. If they taking down the defense system, known as the Universal Federation(or Outer-Galactic Federation;OGF). They kan rule over an entire universe, then they can travel to an another universe and fight and destroy everything there.


It's just a question, of who will win this battle. If the M31 people takes over. It's the end for all civilizations in this Universe we are living in.
And this is what is called, the battle of The Universe.
Last edited by kristoffer on 19.10.2012, 18:26, edited 2 times in total.
Computer specs

pla879 wrote:Sorry to hear about your hard drive.....I have my add-on that I am building on 2 hard drives just for my own peace of mind....How far are you along with rebuilding your add-on? Any estimate on a completion date? I like your ideas and want to see the work.

I have a little work left. I have most the ideas on my screenplay I am writing.
I can be able to share the screenplay with you, but only a few pages. I have written a lot.
Computer specs

I am also making a sci-fi story to the fictional alien solar system Boliverius Alvera Sagittarii, and this in the 4th story in the same franchise:

In 2102, a satellite crashlanded at the surface of the world Janus, to the Janusian civilization, in the Boliverius Alvera Sagittarii planetary system. The satellite came from an unknown region. The scientists were working on to find where it came from. It took years to find an answer. It was believed that it came from an unknown galaxy far far away, at the edge of The Universe. The galaxy has been easily named, C-1. They tried to find out which star in this galaxy. It came from a yellow star. Then Commander Chris ordered to send a spacecraft to this galaxy and to this star to search after a planet there.
In 2108 they got a message. It were found a habitable planet with 2 moons. It is intelligent life there, and the spacecraft were transmitting images, and Commander Chris couldn't believe what he saw. It was like he have seen this world before. It was like a world he have lived on before.
A year after, in 2109, Commander Chris decided to contact this civilization.


These planets have been found around the star:

Planet A, from the C-1 galaxy. An unknown civilization where discovered here. 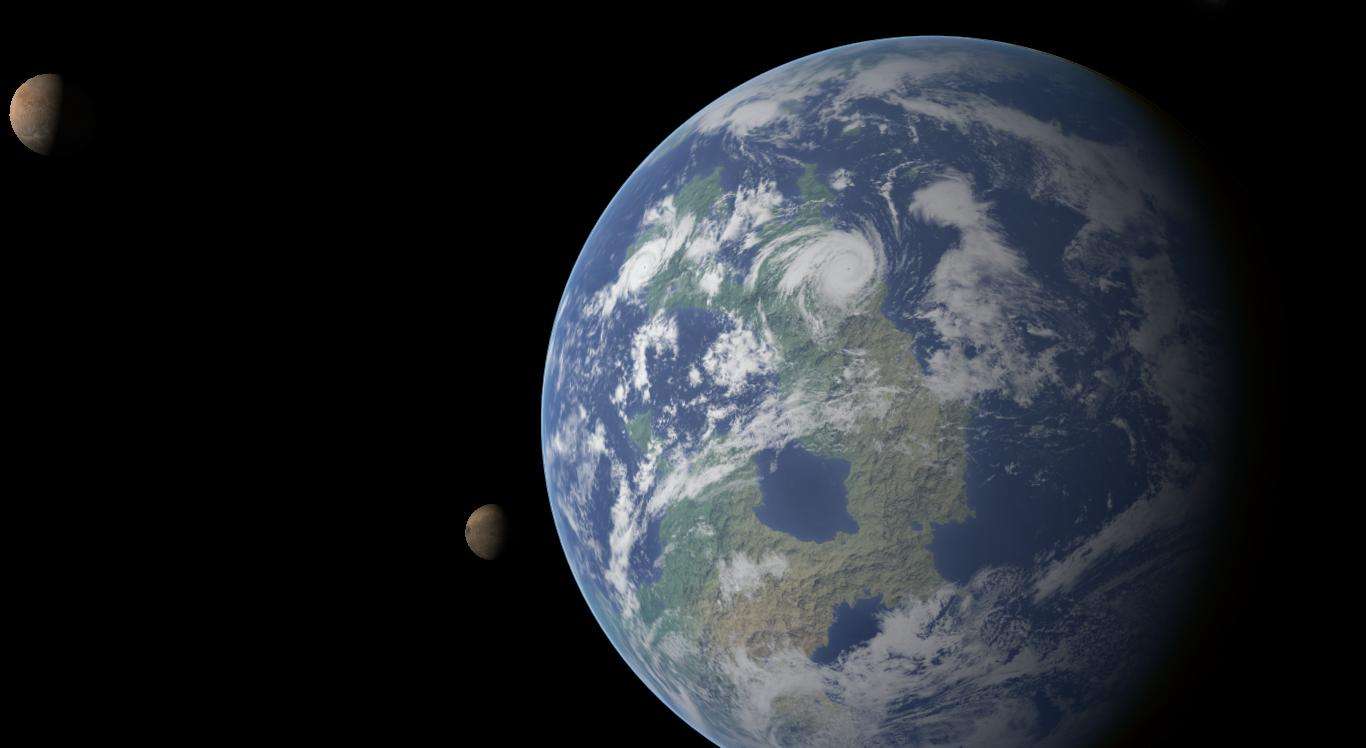 Planet B, from the C-1 galaxy.It has a similiar environment like Mars. 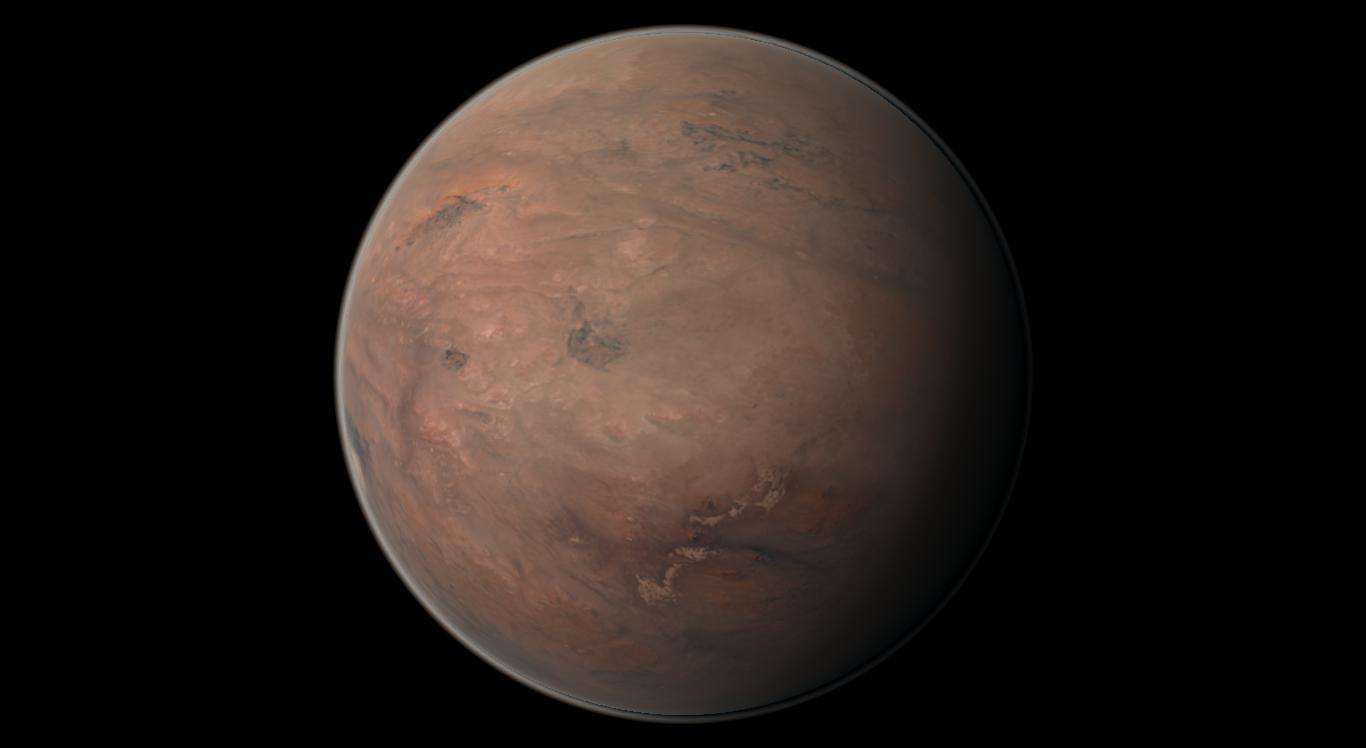 Planet C, from the C-1 galaxy. Has somekind of a similiar environment like Jupiter, and also has a moon that is habitable but very cold. It has a similiar climate like the South Pole on Earth, so it's a frozen world, and it has the right size to hold a stable atmosphere. It has vast oceans and filled with icebergs. 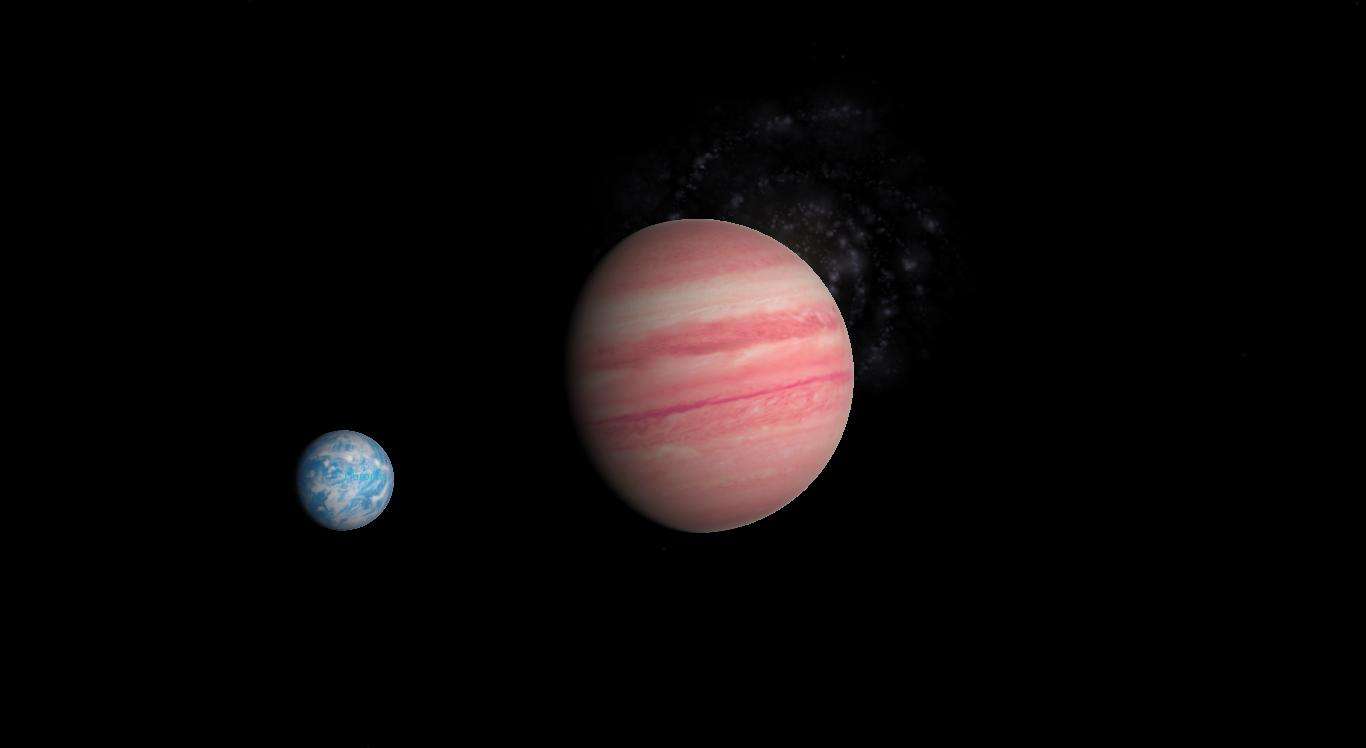 Zandrania
Type: Planet
Size(diameter): 14200 km(1.11x Earth)
Habitability: No
Orbital period: 1.2 Earth years
Distance to it's star: 0.75 AU
Moons: 2(Zalena and Mendoria)
Age: About 200 mill. years
Info: Zandrania is a rocky, hot and volcanic planet located in the Boliverius Alvera Sagittarii solarsystem. Zandrania has a planetary disk around it, caused by a moon-sized object collided with it, right after the planet were formed, nearly 200,000 years ago. Zandrania has two moons, called Zalena and Mendoria. These are fictional names that I have made. Zalena is moon-sized and Mendoria is about the size of Mars. Zalena is the inner moon and Mendoria is the outer moon. Zalena is separated with 95,000 km from Zandrania, while Mendoria is separated with 112,812 km from Zandrania. In the future, there is a chance Zandrania will be habitable. The planet is now currently in a cooling process. 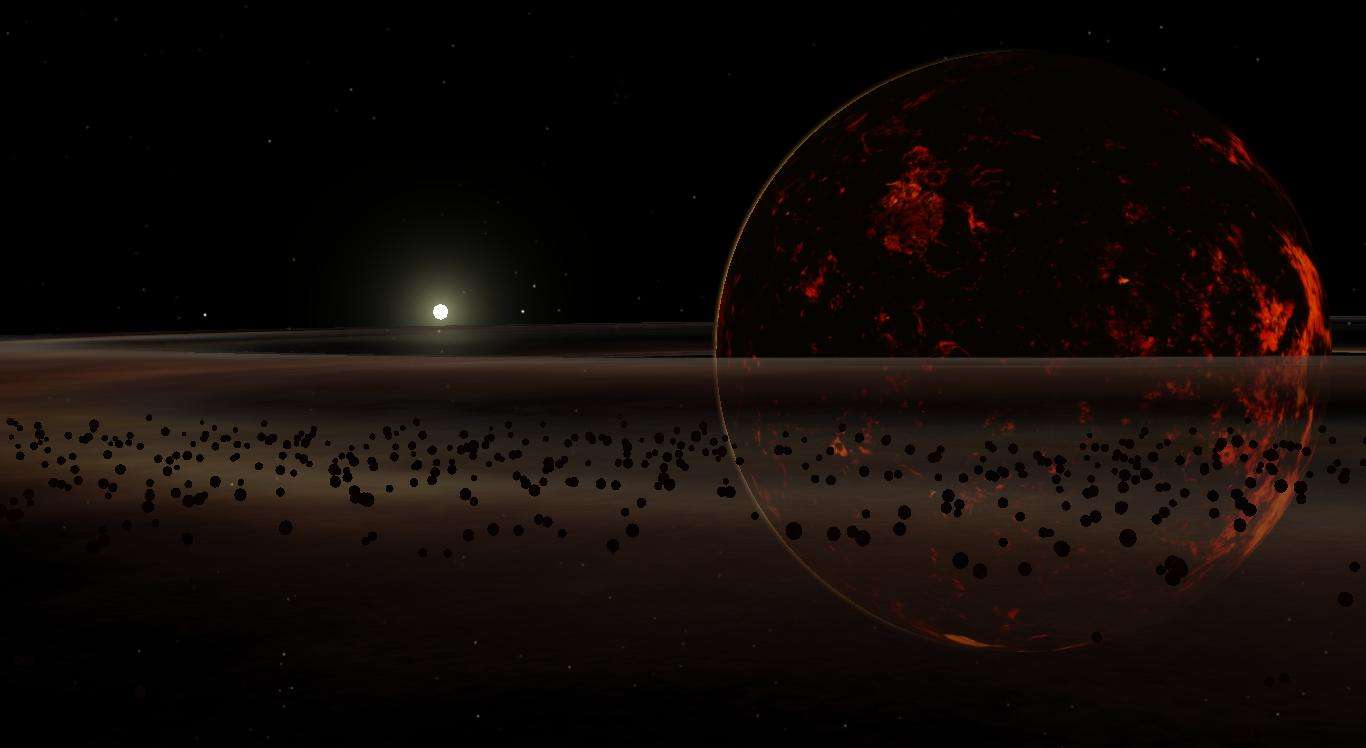 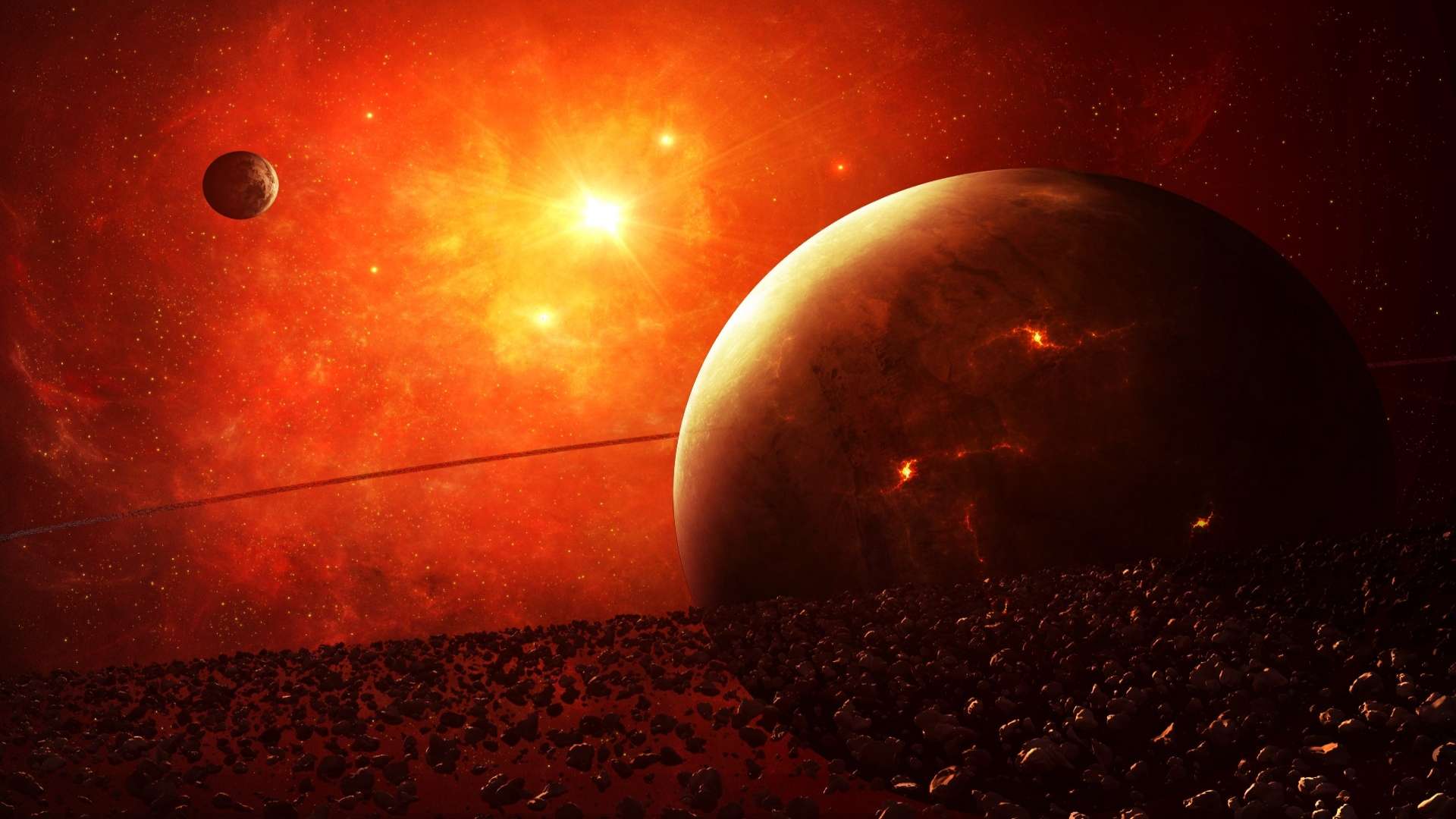 Nice shots, especially the second, even if it isn't from Celestia.

Did you make that artistic impression?

Tegmine wrote:Nice shots, especially the second, even if it isn't from Celestia.

Did you make that artistic impression?

Yeah, it is what the planet will look like.
It will be part of a science fiction story I am writing.
Computer specs


Taliania
Type: Moon
Orbiting: Vertilu
Size(diameter): 8600 km
Orbital period: 7.5 Earth days
Distance to Vertilu: 540,000 km
Inclination: 2.6
Rotation: 38.5 Earth hours
Habitable: No
Atmosphere: Yes
Info: Taliania is orbiting the massive gas giant planet Vertilu, located in the Boliverius Alvera Sagittarii. Taliania is a rocky planet, and is almost double as large as Mars. Taliania has an atmosphere, but the planet isn't quite habitable, because of the extreme radiation from the gas giant. Taliania is extremely hot, and have large lava oceans and some volcanoes. 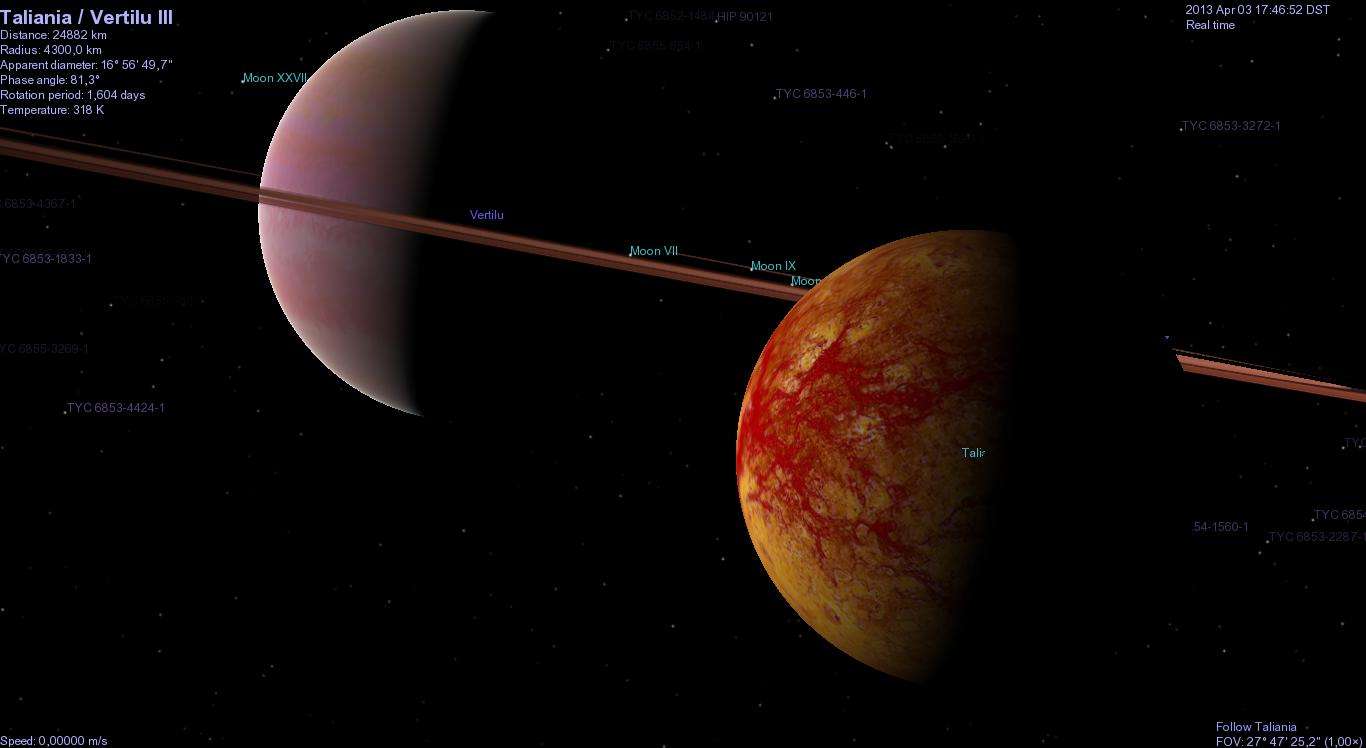 Orvania
Type: Moon
Orbiting: Vertilu
Size(diameter): 4200 km
Orbital period: 8.2 Earth days
Distance to Vertilu: 583,000 km
Inclination: 2.6
Rotation: 38.5 Earth hours
Habitable: No
Atmosphere: No
Info: Orvania is orbiting the massive gas giant planet Vertilu, located in the Boliverius Alvera Sagittarii. Orvania is a rocky planet, and is smaller than Mars. Orvania has not a present atmosphere, and it is a very cold world. What you can find here is ice, a lot of ice. 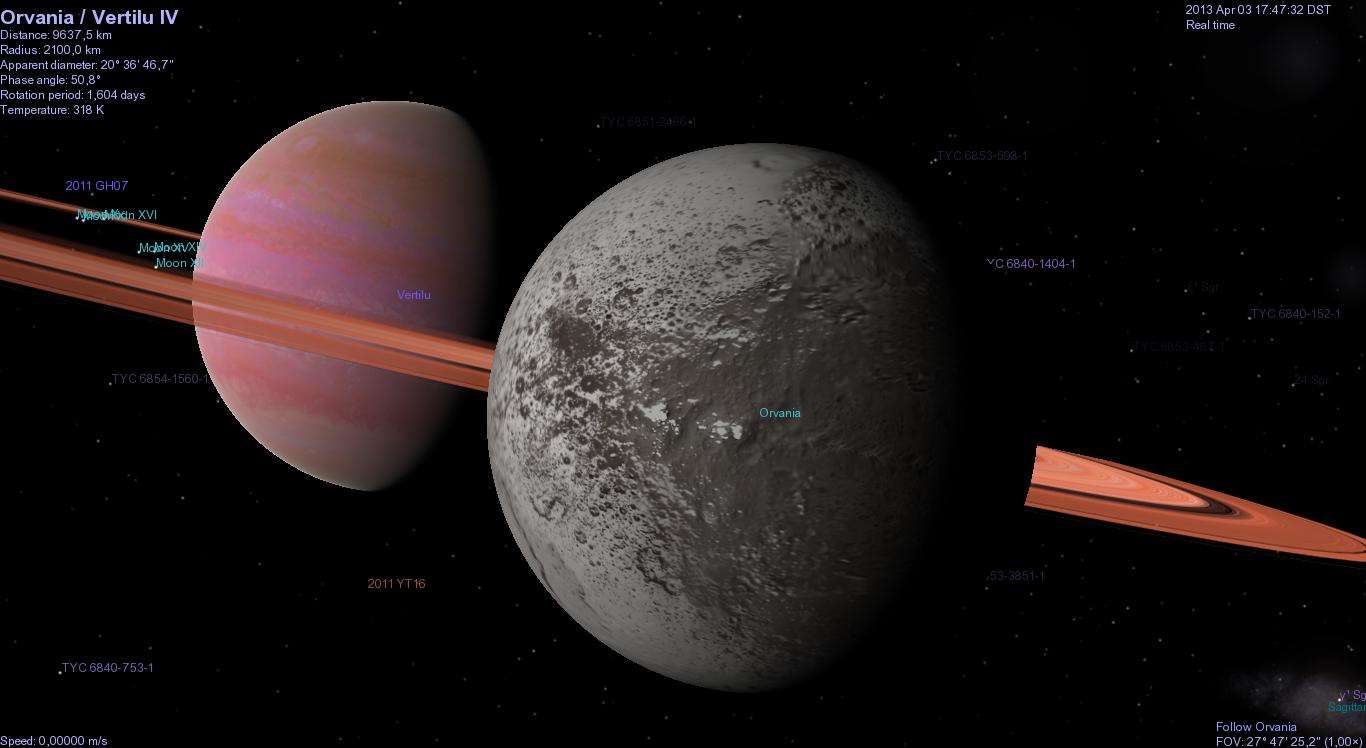 More info about other objects in this huge alien solarsystem will come later.
Computer specs

this is off-topic, but I think that last night I was dreaming about this alien solarsystem

and I just, WOW!!!
It felt real. I was on the alienmoon Janus, with the Alverian civilization. Yes, I have called them that. They are called Alverians.
http://the-great-battle-of-the-universe ... i/Alverian
Computer specs

This are the total number of objects that will be in this addon, when the next version is released, I am still working on it. I am nearly finished with adding moons to the gas giant Vertilu. So far, I have added at least 40 moons, and it will have 58 moons. Some of them will have an original name. I have also started naming them. The reason that the terrestrial world Zandrania will have so many moons is because it was an object, the size of our Moon who collided with it, hundreds of thousands of years ago, and formed a ring of rocks around it, some of them very large to classify them as moons. Some of them can you classify as a minormoon. 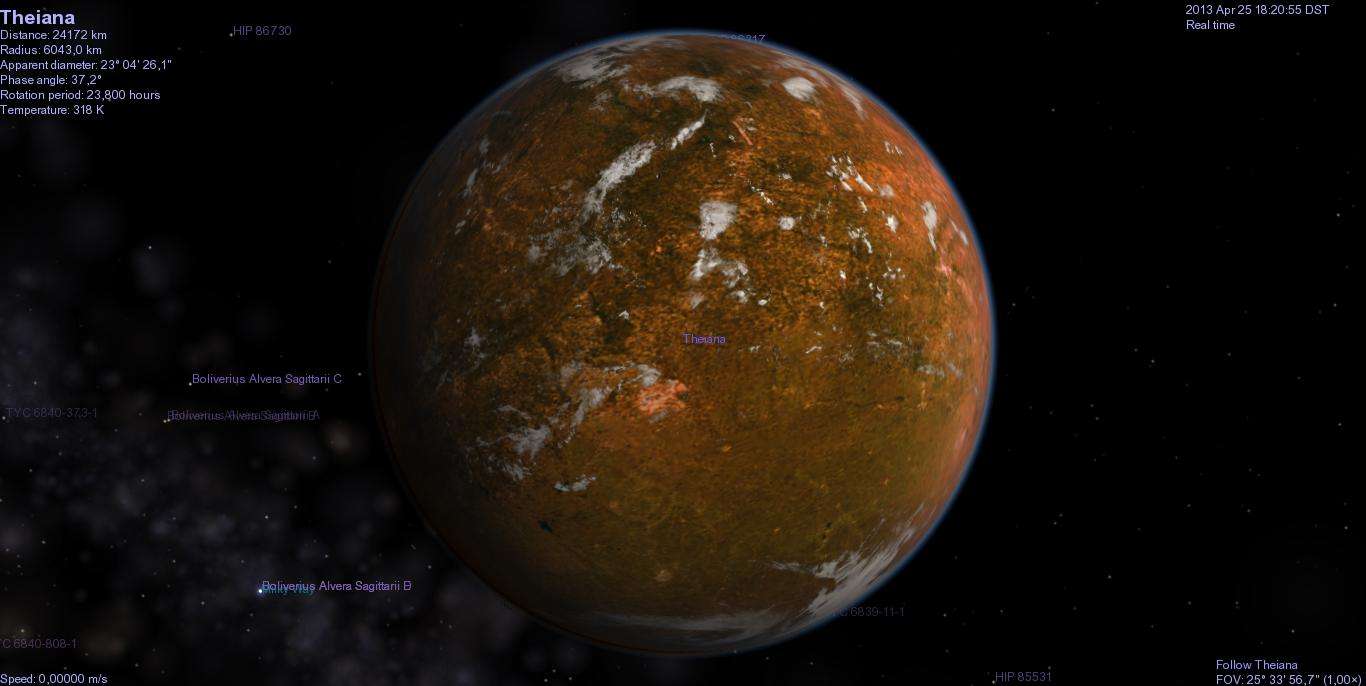 The next goal that I am going to do with this addon, is to convert it over to the other 3D space simulator, Space Engine
http://en.spaceengine.org/

I guess everybody here have heard about Space Engine. A remarkable space simulator, Celestia is aswell that.
Computer specs

kristoffer wrote:The next goal that I am going to do with this addon, is to convert it over to the other 3D space simulator, Space Engine
http://en.spaceengine.org/

I guess everybody here have heard about Space Engine. A remarkable space simulator, Celestia is aswell that.

I hate that program with a passion, because a) none of my computers can support it, or even OpenGL 3, b) it is trialware, meaning you have pay for full use of the damn thing, c) my life situation ever since my folks kicked me out prevents me from ever being able to accumulate the money for a new laptop for the rest of my natural lifespan.

Well, maybe I shouldn't do that anyways.
Computer specs